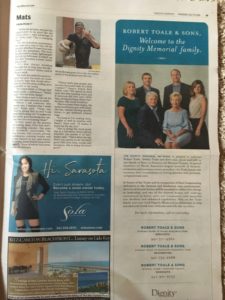 Click here for the online article. There are more pictures to view.

Michele Penn had a longing to get involved with something she was passionate about. She just didn’t know what.

“I wanted the universe to put it in front of me,” Penn said. “Something I was passionate about to wake up every morning and do.”

Scrolling through Facebook a week later, Penn found what she was looking for – a video of elderly women in Ohio making mats for homeless people. The video showed tables of ladies laying out the grocery bags, cutting the bags to make the plarn (plastic yarn), crocheting them and then the finished product being given out to those who needed it.

“It touched me so much to hear the gratitude of these homeless people who were so appreciative that the ground was wet and they didn’t have to lie on the wet ground,” Penn said. “I saw that on Facebook and thought, ‘That’s it! I can learn how to do that.’”

Penn set out to learn how to make the mats from start to finish. After watching YouTube videos describing how to make the plarn and the steps to crochet with it, she began her first mat.

“I started doing it myself and was finding it’s pretty slow and I couldn’t do as many as I thought I could,” Penn said. “My first mat took me 33 hours.”

Just over a year later, Penn has completed her 33rd mat.

Now, what used to take Penn 33 hours only takes her eight. Neighbors drop their grocery bags off at her home, members of the community help her make the plarn and Penn teaches classes to get help with each of the steps.

The steps are relatively simple, so Penn has people of all ages helping her make mats, including school children and nursing home residents.

The process starts with grocery bags – about 500 bags for one mat. The bags are folded up and cut into three pieces. Those pieces are then tied together to make the plarn. That step is repeated to make a ball of plarn. Once the ball is made, it can be crocheted into a mat.

“It doesn’t matter if you can crochet, if you don’t finish it, give it to me.” Penn said. “Do what you can do, I don’t need everybody to do everything.”

Penn gives completed mats to Captain Andy Bailey at the Salvation Army. The nonprofit then distributes them to people who are usually considered chronically homeless, or those who refuse the Salvation Army’s services and prefer to stay outside due to reasons such as rules, regulations, accountability, mental illness, drug addiction or prostitution. Bailey said even though some people may refuse the Salvation Army’s services, Penn’s mats opens the door for conversation about seeking help from the nonprofit in the future. The act of kindness goes a long way.

“While we are here, we have the opportunity to do good like she (Penn) does — take advantage of it,” Bailey said. “She is changing lives.”

For the homeless population, these mats are a way to stay off the ground, whether it’s wet from rain or hot, dry pavement. The mats are also easy to clean off, lightweight for carrying and roll up with ease. A rolled-up mat also becomes a more cushy place to sit.

“It’s Him (Jesus) working through her to help ease the discomfort of others,” Bailey said of Penn’s work.

The mats also help the environment because the mats are made of plastic bags that would otherwise be thrown away, ending up in a landfill or the ocean.

“It’s these kinds of things that really make a difference,” Bailey said. “It’s the little things.”

Penn keeps a mat in her car for when she sees a person in need.

“When I see someone who needs one, I explain that I make this,” Penn said. “They say ‘You’re giving this to me? I can have this to sleep on?’ It makes me feel really good knowing one-on-one that you’re helping them.”

To help speed up the process of making mats, Penn has started teaching classes. She goes to Goodwill, classrooms, the Boys & Girl Scouts, private residences, nursing homes and hosts classes in her own home. Recently, Penn hosted four of her friends, three of which had never seen the process before.

“(These mats) give people who are less fortunate than us a little comfort,” Penn’s friend Beth Fallon said. “We spend an hour each Monday (making mats) and if everyone did that, just a little time, doing anything, what a better place this world would be.”

The more mats Penn makes, the more creative she gets with them. She has started visiting specific stores to get different colored bags.

“As long as I’m making them, I might as well be creative with them,” Penn said. “It makes it more fun for me, too.”

33% of my proceeds for Peace in the Present Moment go to Charity!

A new charity is chosen every year on Michele's birthday.